This document describes what is Aximmetry Dual Engine (Aximmetry DE), how to install it, how to get started with the included example projects and how to create your own projects.

To get started, read through this document, install Aximmetry DE, take a look at the examples and start experimenting with your own projects.

How to install Aximmetry DE

How to load the example projects in Aximmetry

We included 2 example projects to help you get started:

Basic ([Tutorials]:Unreal\Basic.xcomp) shows a minimal setup: a very simple Unreal scene with a virtual camera and a single billboard controlled by Aximmetry. A billboard can be described as the keyed camera image of a talent displayed on a plane in 3D space.

To use the example project:

The same steps apply to the Complex project.

How to create your own projects

The basic workflow is the following (each step will be explained in detail in the next section).

Create a new Unreal project. Some project settings have to be modified as detailed below. Add an Aximmetry Virtual Camera to the scene. This is a custom Unreal package that facilitates connection between Aximmetry and Unreal, provides virtual camera functionality and renders the billboards. Edit the scene, build your virtual environment. After your scene is ready, you have to cook it, so it can be used by Aximmetry. Open Aximmetry, create a new compound and the drag the Unreal project file into it. After connecting the modules as detailed below you should have a working Aximmetry DE project.

Create a new Unreal project. We recommend a blank blueprint project with no starter content. You can also use an existing project, in this case we recommend choosing the Open a Copy option when the project conversion window pops up.

Aximmetry Virtual Camera has to be able to write to a custom stencil. To enable this:

By default, the player pawn will show up in the scene as a gray sphere. This can be resolved in 2 ways:

Set up the startup maps:

Add an Aximmetry camera to the scene:

Cook the project by clicking File / Cook Content for Windows

After cooking is complete, the Unreal Editor is not needed anymore. You can close it if you want.

Setting up objects in front of the billboard

If the object is opaque:

Note: Not doing this results in aliasing and jittering at the edge of the object.

If the object is translucent:

Note: Not doing this results in aliasing and jittering at the edge of the object and in front of the billboard.

Aximmetry cameras can be automatically added to the project by selecting one from the the Aximmetry / Add Camera menu.
This will copy the assets from the Aximmetry Common Library to your unreal project and add a camera actor to the scene.

If there is a camera in the scene already, this menu can be used to replace the existing camera with another one.
A confirmation window will pop up with details about the operation.
If you continue, the existing camera actor and assets will be deleted and a new one will be added.

New versions of the Unreal assets and the corresponding Aximmetry compounds are released regularly.
When a new version is available, a notification will pop up in the lower left corner when you open the project, prompting you to update. Updating the camera assets is necessary to maintain compatiblitiy with Aximmetry, so it is highly recommended.
If you choose to update, a confirmation window will pop up with details about the operation.
If you continue, the existing camera actor and assets will be deleted and a new one will be added.

If you are using an older version of the Aximmetry Common Library but your Unreal project contains a newer version of a camera, you will be prompted to downgrade to the camera version that is compatible with Aximmetry. This works the same way as the update.

Drag in the .uproject file from your Unreal project root directory. This will create an Unreal Project module node.

Connect the Out pin to the output of the compound. Now you should see an image rendered by Unreal appear in the output window.

By default, the camera is at the origin, so it's probably intersecting the geometry of the environment. You can use either a Camera Mover module or a Virtual Camera module to move the camera. We recommend you use the virtual camera, because it automatically handles the billboards as well. To set up the camera movement: 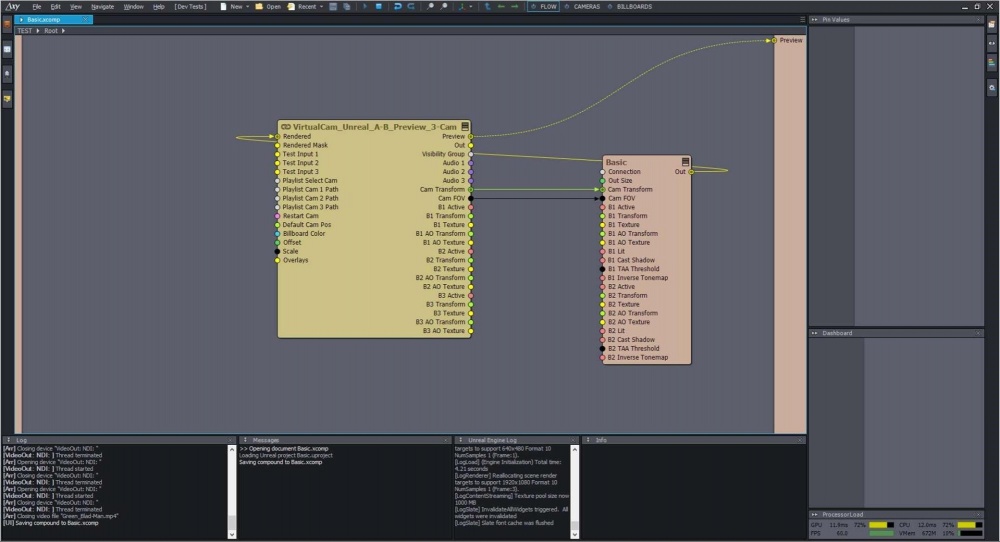 If you want to use a billboard: 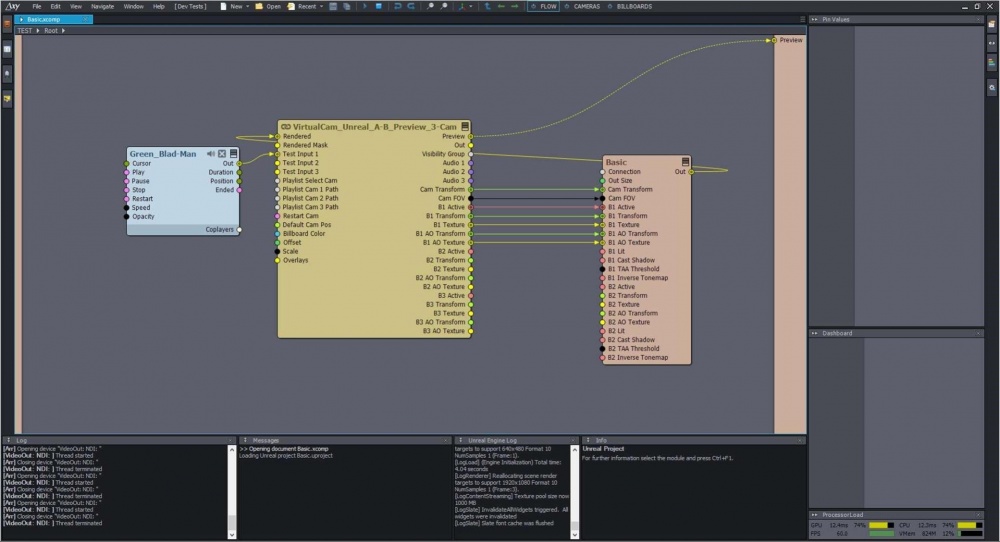 Passing data from Aximmetry to Unreal

You can pass arbitrary data from Aximmetry to Unreal. This can be used to move objects, set light intensity etc.

To pass a value, place a Get Aximmetry TYPE node in a blueprint. TYPE can be any of the supported types: Color, Integer, Logical, Scalar, Text, Transformation, Trigger, Vector and Video. The node will show up in Aximmetry as a pin on the Unreal Project module after you update the pin list. The pin list can be updated by clicking the red chain link button

on the Unreal Project module.

The pin name and the default value are determined by the Name and Default Value parameters of the Get Aximmetry node. The node also has an Order Index parameter which determines the pin order in Aximmetry. The pins are ordered in increasing Order Index order, but the value 0 is an exception, pins with this index will go to the end of the list. Both Name, Default Value, and Order Index must be static (i.e. you cannot use the outputs of other nodes as their input).

The output of these nodes is updated per frame.

The Aximmetry_Camera blueprint uses this mechanism to get values from Aximmetry, so you can find many usage examples in that blueprint.

Most nodes are straightforward to use but there are some trickier ones. 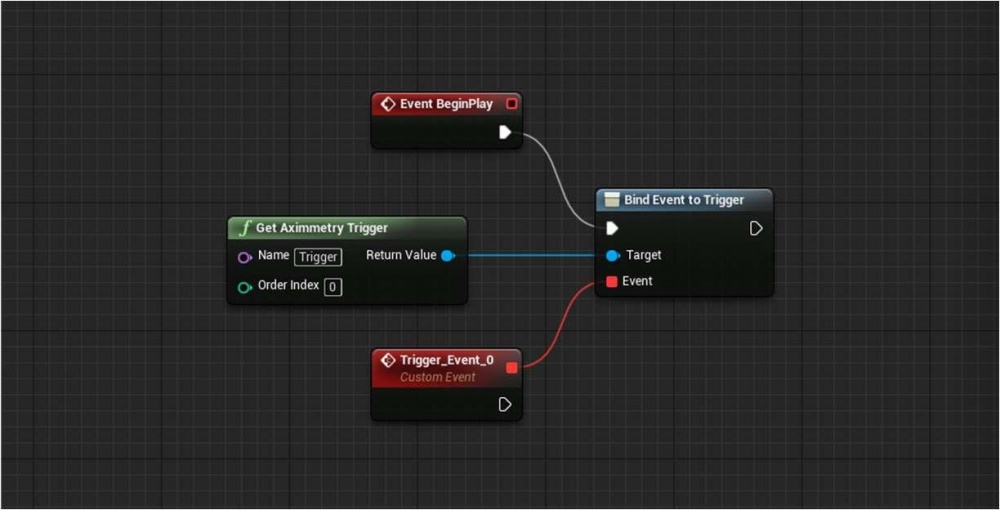 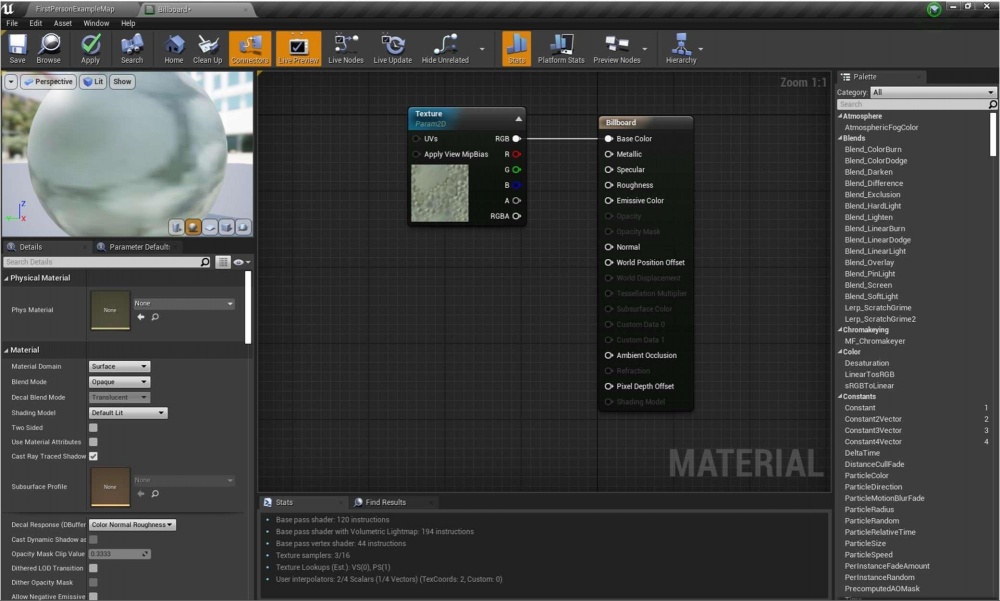 This node will show up as a transformation input pin on the Unreal Project module in Aximmetry. You can connect any transformation you want. However, if you want to can control this transformation from Aximmetry in Edit mode, you can use a Scene Node:

Passing data from Unreal to Aximmetry

This feature is currently limited to video outputs. It will be expanded in the future to cover all data types and an arbitrary number of outputs.

If there are no Set Aximmetry Video nodes in the scene, the default output of the Unreal Project module is the scene as it would be rendered to the screen by Unreal. It works like a hidden Set Aximmetry Video node with the name “out”. This default output has 3 possible formats that can be configured in Edit / Project Settings / Rendering / Default Settings / Frame Buffer Pixel Format.

Setting up a virtual camera and billboard rendering in Unreal is a very complex process, so we built the Aximmetry_VirtualCam_3-Cam package to do most of the work.

It provides the following features:

The default settings should look pretty good for most use cases but there are some parameters you can tweak if it doesn't meet your needs:

The Get Aximmetry Video blueprint node has a pin called S RGB that controls whether the received video is treated as sRGB or linear.

sRGB should be enabled for textures that contain color information (camera footage etc. that will be rendered into the scene) and it should be disabled for textures used for numerical calculations in shaders (normal maps, masks, etc.) NOTE: This option only affects 8-bit textures. Unreal treats all non-8-bit and floating-point textures as linear.

The Set Aximmetry Video itself doesn’t do any gamma correction. Its output depends on the settings and pixel format of the texture or render target you connect to it. For more information on this, please refer to the Unreal Engine documentation.

The default output is always treated as sRGB regardless of pixel format.

Aximmetry can connect to Unreal in two different ways, each one is useful in a different scenario:

In Cooked mode, Aximmetry uses the cooked version of the project which is generated when you press File / Cook Content for Windows in Unreal. This means that if you edit the scene in Unreal, you have to cook the project again. You can leave Aximmetry running with the Unreal Project module in Cooked mode - it will pick up the changes when cooking is finished and reload the project automatically. If you added / removed / changed any Aximmetry nodes in the Unreal blueprint as described in section 4.1, after cooking the project, Aximmetry will detect the change and a red chain link button

will show up in the upper right corner of the module. Click on this button to update the pin list.

In Live Sync mode, Aximmetry connects to the running Unreal Editor when you press the Play button. This is when the Unreal Project module will pick up the changes in the pin list as described above. Click on the red chain link button

To use Live Sync:

You can stop and start both the Unreal scene and the Aximmetry compound or even the Unreal Editor and Aximmetry itself, the connection will be re-established automatically.

The resolution of the viewport is set automatically based on the value of the Out Size pin just like in Cooked mode. If the game is running in a separate window, the window is also resized.

Setting up reflections in Unreal Engine

There are 3 types of reflection in Unreal Engine:

Planar reflections provide high quality results with a moderate performance impact. In general, we recommend using this type of reflection.
How to set up planar reflections is described in the Unreal Engine documentation.

Note: If ray tracing is enabled in the project the camera has to be configured accordingly. See Ray Tracing in Unreal Engine.
If ray tracing is not enabled, there is no need for additional camera configuration.

The billboard is not affected by the depth of field effect due to limitations in the Unreal Engine.

The Unreal Engine supports ray tracing. It consists of multiple features that can be turned on or off individually. See more information.

Most of these features can be used with Aximmetry DE but there are some limitations due to the experimental nature of ray tracing in the Unreal Engine.

The camera supports most ray tracing features but there are some caveats due to limitations in the Unreal Engine:

Currently, the camera can operate in 3 rendering modes:

The mode can be selected in the Details panel of the camera using the Aximmetry / Render Mode drop down menu. The scene must be set up according to the selected mode to avoid rendering errors.

This is the default mode. The camera works the same way as before the introduction of ray tracing features. We recommend using this mode because it can produce high quality results with good performance.

Setup (only required if Ray Tracing is enabled in the project):

Currently some features cannot be fully supported due to limitations in the Unreal Engine: