Sync, Reference, Genlock, Black Burst. These terms are used for basically the same method, where the video output of one source (or a specific reference signal from a signal generator) is used to synchronize signal sources together. When hardware are synchronized this way, they are said to be generator-locked or genlocked.
In broadcast production, unsynced signals can cause noticeable issues for the viewers. One very noticeable example is if the tracking system's signal is not synced with the corresponding video signal, then the movement of the virtual environment is not going to properly align with the movement of the camera.

Which hardware should be connected to the Genlock system?

In connection with virtual production in Aximmetry, we connect the following hardware to the Genlock system:

Or generally, any hardware that produces output should be connected.

How does syncing work?

Important, that only the outputs of all the connected hardware will be synchronized. Better said: the output of the upcoming frame will be happening at the exact same time for all hardware.
The sync/genlock signal is coming from a Sync Generator (this is a separate hardware) and is connected to all hardware with an SDI cable.

Important note: You only have to connect the capture card to the genlock system, if you want to have SDI output from this card. The input synchronization will happen because all the signals arriving at the capture card are already synchronized from the different hardware outputs that are connected to the Genlock System.

Note:
Even after syncing, the delay between the tracking signal and the video signal might be subject to further change, since these signals are buffered in different manners when entering your PC. The final delay can be addressed with the Tracking Delay setting.

In most camera compounds, it is possible to see if the capture card is genlocked.
On the Camera control board, enable SDI on-screen information: 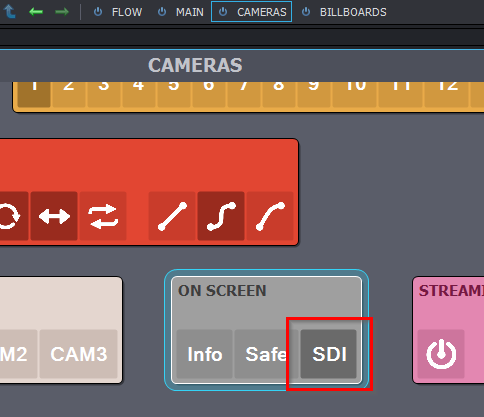 And if the letter G appears at the end of all the SDI information, then the capture card is genlocked:

Important note: This means that the video output of the capture card will be genlocked. It does not mean that the inputs are genlocked. In a matter of fact, there is no way for Aximmetry to automatically determine if an input is genlocked or not, as no such information is sent through common protocols and video signals.