Aximmetry contains several delay values for various purposes. In this guide, we summarize them and explain how to adjust them according to your needs.

Note, that every delay mentioned here is counted in frames. So they are dependent on the rendering frame rate. The higher the frame rate the less delay is in seconds for the same value.

In-to-out latency specifies the constant delay the system should try to keep between the incoming video and the final output. This delay includes the delay from:

The recommended practice is to adjust the in-to-out latency value to as low as possible without getting any "Cannot keep latency" error, especially when using led walls. This value will be a hardware-dependent one, you have to find it manually through trial and error.

In-to-out latency can be changed at Edit -> Preferences -> Video Inputs:

Camera Delay specifies the delay value that the system should add to the input signal. In most cases, it is not recommended to change this value.
Camera Delay is included in most camera compounds, like VirtualCam, TrackedCam, and TrackedCam_AR: 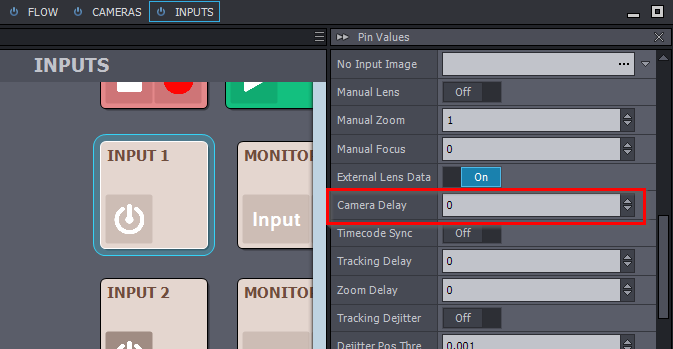 The only case you can use negative Camera Delay is if there are enough frames pending in the software buffers of Aximmetry. So if you set the in-to-out latency to the lowest possible as recommended, you most likely won't be able to use negative delay without getting the "Cannot keep latency" message.

Tracking Delay specifies the delay value that the system should add to the data coming from your camera tracking system. This needs to be changed in almost every case, cause it is very unlikely that the camera's video and tracking data will be in sync otherwise.
And in most cases, tracking delay is a positive value. As in most cases, tracking data reaches Aximmetry before the camera's video.
Tracking delay is included in TrackedCam and TrackedCam_AR compounds: 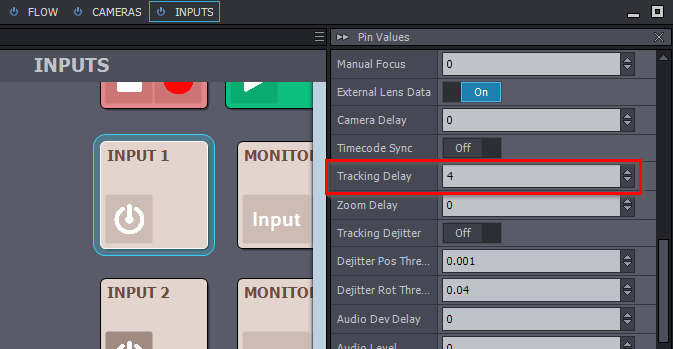 To summarize: the best practices are when using tracked cameras:

However: in very rare cases, the tracking system has a long processing time that results in having an even greater delay than the camera input. In this case what we recommend is: first try to use a negative Tracking Delay.  If it is not possible (you get "Cannot keep latency" for the tracking device) then use a positive Camera Delay  (or alternatively increase the in-to-out latency, thus keeping the sync between the camera inputs in the case you use multiple ones).

There are two specific delays that only happen in Led Wall compounds:

This setting is only needed when Digital Extension is used in led walls.
Digital Extension's delay puts the captured video of the led wall into the digital extension at the right moment.

This setting is only needed when using multiple camera inputs with led walls.
There's always a certain amount of delay while the change in the perspective reaches the led walls and then the camera image reaches the Aximmetry system. To ensure that the switch of the led wall picture and the camera change happens at the same time on Aximmetry's final output you have to set a Picture Delay value: