A more hardware-intensive (both on the computer's and studio hardware's side) and therefore more expensive technique is the employment of LED walls or screens.
In Virtual production the main functionality of LED Walls is, to display the virtual environment around (or behind) the presenter, and create the illusion, that he or she is actually in the virtual environment.
LED Wall setups are used with 'Moving Cameras'. To learn about camera types used in virtual production, please refer to this document: Stationary or Moving Cameras?

What is a LED Wall in virtual production?

LED walls are screens that can display any image you want. In Virtual production they are used to display parts of the Virtual environment, to create the virtual environment's atmosphere in the real world. The necessary hardware for LED wall production   (including the PC, the Camera Tracking system, and the LED walls) can be quite expensive.

The utilization of camera tracking systems is essential in LED wall setups. This allows the displayed image on the LED wall to move and provide a parallax view according to the camera’s motion. It is also possible to use LED walls with 'Stationary' cameras, but when we are talking about LED wall setups in general, we are talking about the 'Moving' camera setup, since that way you can utilize all the potential of the LED walls, and it is way more common. 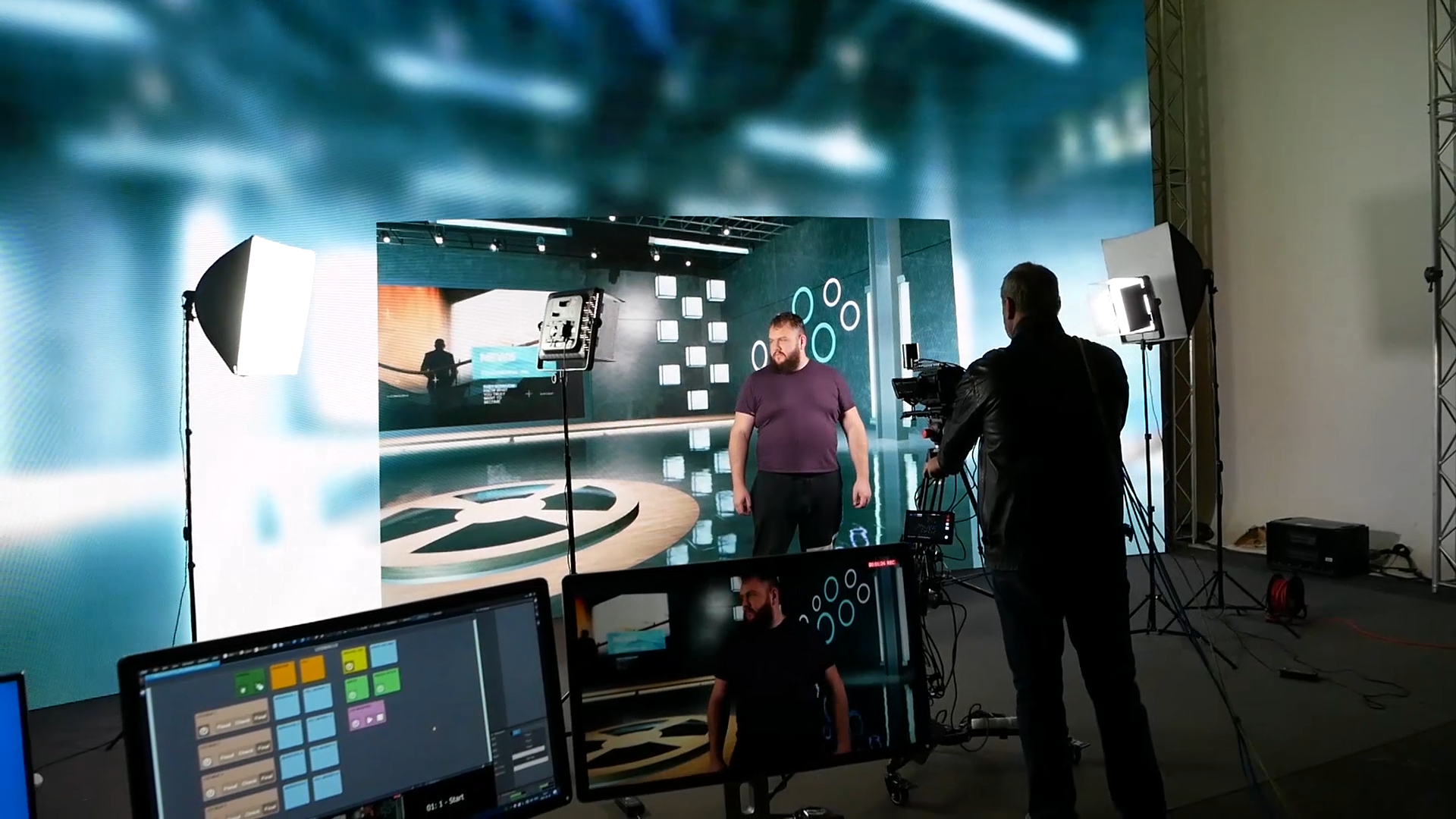 If you want the full body of your talent, it is also necessary to think about the floor your talent is standing on. The floor also can be a separate LED wall. You can also build a physical environment, that fits into the virtual studio.

In virtual production, LED walls are becoming more and more popular in high-budget productions as it has several advantages. One of the main advantages of employing this technique is that the light of the environment displayed by the LED wall is cast upon the talent and the objects of the physical setting, also allowing reflective surfaces to reflect the light of a virtual world. This way a sense of realism is provided without having to use additional special illumination or complicated post-production work. Another huge advantage often highlighted by well-accomplished directors and producers is that talents can perform in a setting that provides a good sense of the environment as they will be in the final production, thus making it easier for them to perform.

When working with LED wall setups you need to account for the Morie effect. The Moire effect occurs from the difference between the pixel structure of the LED board with that of the pixel structure of the photograph or video. Since LED boards have a lower pixel density and larger pixel size than the resolution captured by your camera, the moire effect is almost certain to occur when photographing or filming them.

Hardware elements of a LED Studio

LED walls are built by combining smaller panels into a large screen. They come in many shapes and sizes, the most common is the flat LED walls, but you can also find curved screens. These panels one-by-one have a smaller resolution but combined they can produce big resolutions. To be able to cast any image to your LED wall you will need a central computing unit (often referred to as LED wall processor). Depending on the LED panels and LED processor the handling, and sorting of the video frames can be different. Aximmetry's flexibility allows you to be able to prepare your output for any kind of LED wall processor.

As previously mentioned a huge advantage of LED walls, is that they cast the light of the virtual environment on the talent. This doesn't mean however that you don't have to use studio laps to light your talent. 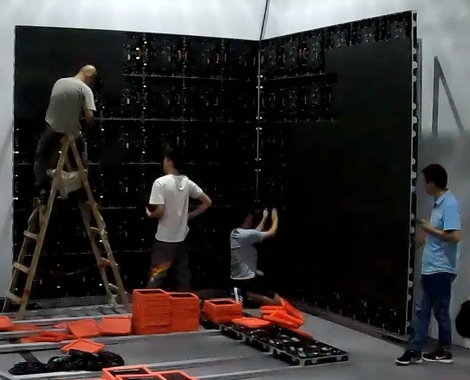 The LED wall building is handled by professionals. For day-to-day use, you also need to employ a LED wall technician or have someone in your team with the required knowledge.

Extending the virtual environment beyond the LED walls

Using the Digital Extension function you are able to extend the virtual environment beyond the LED walls. With the help of Digital Extension, you can amazing scenes, as seen in the picture below. LED screens and cameras are not 100% color accurate, so if you want to use Digital Extension you need to compensate for that.

Digital extension requires a very precise camera tracking system. If the tracking system is not precise enough, it can create unalignments between the physical LED wall and the virtual environment, leaving you with an unsatisfying result.

With Aximmetry, you can easily create LUTs for your camera and LED setup, that can be used for the perfect color matching. Aximmetry can handle all the necessary tasks of LED Wall production, such as the composition, the rendering, the handling of the cameras, the tracking, and so on. You can also use Unreal engine for rendering if you decide that way. 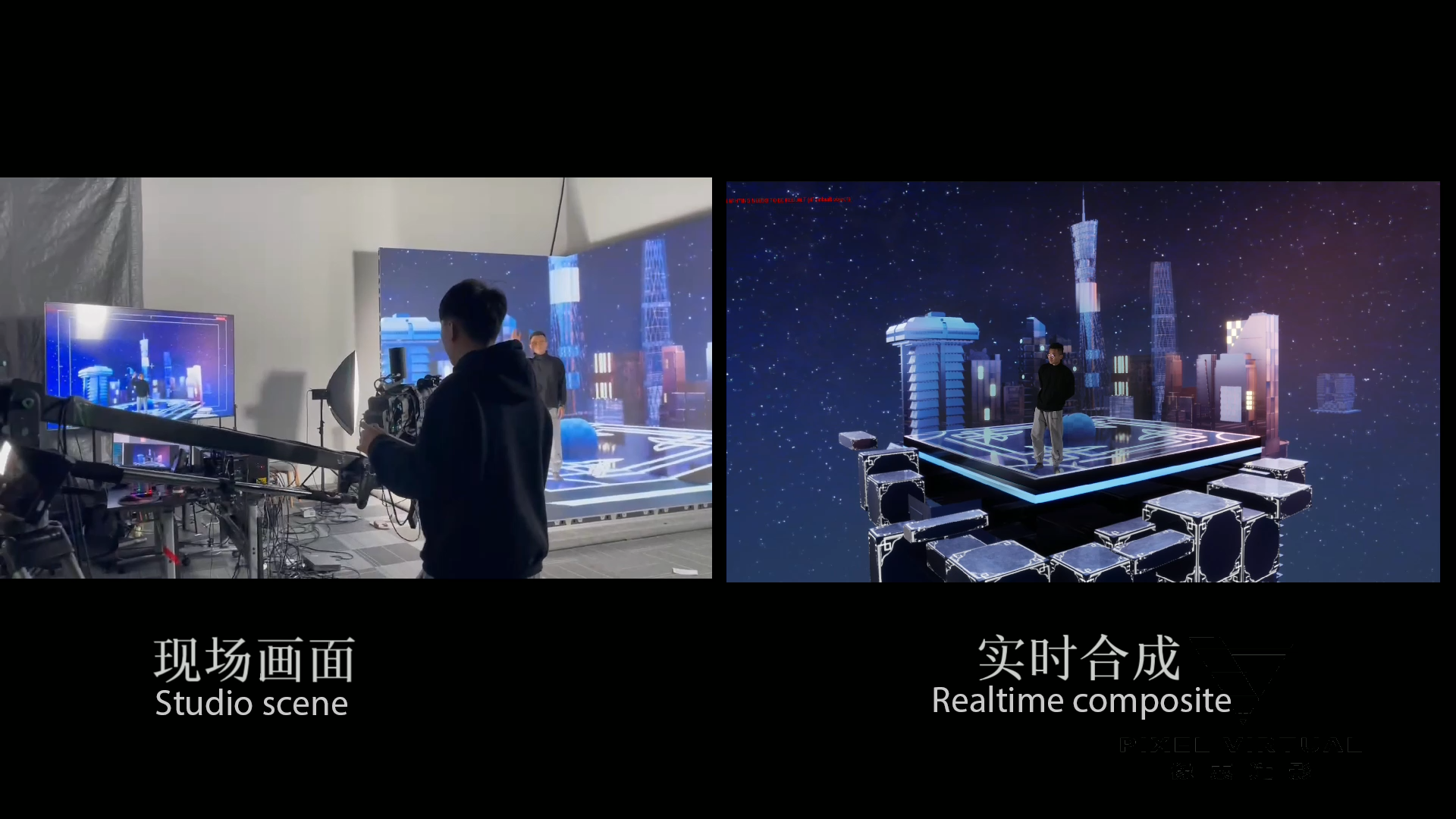 If you would like to know more about LED Walls in Aximmetry, please refer to the documents below: