Aximmetry's main function is to merge (to composite) a virtual environment with a real-time - or pre-recorded video feed.
Billboards are one of the most fundamental and important features in Aximmetry.

What is a Billboard

You will need a Billboard for every studio camera you want to use in your project.

Note: Billboards are used in Aximmetry SE and DE too. In the case of an Unreal Scene, you can use a maximum of 3 Billboards at a time per camera (because of Unreal limitations). From Aximmetry's perspective, there is no limit on the number of Billboards you can work with. However, most hardware configurations are not able to handle more than 8 billboards at a time.

You can find the Billboard # panel in the BILLBOARDS Control Board. The pin values panel will show the pins of the billboard # panel when the panel is selected. (Selection is indicated by the blue border on the panel) Each line represents the workflow of an Input and a corresponding Billboard with all its settings. In this example, we are using a compound with 3 cameras. There are as many Billboards as inputs.

If both of the buttons on your INPUT panel are turned off, then your current INPUT is offline, so you won't see the Billboard in the scene, because there is nothing to be displayed on the Billboard.

In order to show content on the Billboard, first, you must activate its INPUT.
To activate the INPUT click the button with the power icon on it.

If the input is turned ON, but the input device is not defined, you will see a red rectangle on the Billboard. with the message: "Device not found". 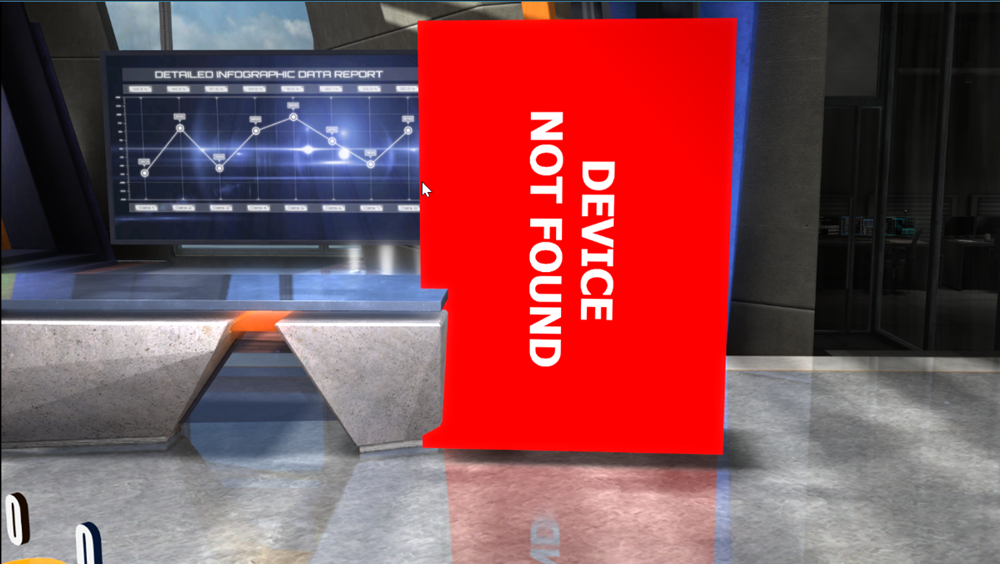 It is a good practice to turn on as many inputs as you are actually using and not more.

Make sure that the Test button is turned off if you want to use a live input (for example a camera feed).

You can also use a pre-recorded video (or image, image sequence, etc. more info here) as input.
Connect the video player's Out pin to the Test Input pin of the Virtual Camera compound. Each Test Input connects to a Billboard with the same number. Then switch the Test button "On".

Now you can see the video playing on the Billboard. In this example, we are using the VirtualCam_A-B_Preview_3-Cam compound, which contains 3 Cameras and 3 Billboards, so each VISIBILITY panel contains 3 buttons. Each button represents a virtual camera.

Note: Remember, that at the beginning, we discussed that each line on the BILLBOARDS control board represents the workflow on a billboard/input pair, so the VISIBILITY 1 panel will toggle the visibility of BILLBOARD 1.

Now you can see the two Billboards in CAM 1, and only in CAM 1. Now if we see CAM 1, we will see Billboard 1 only. But if we switch to CAM 2 we will see Billboard 1, and Billboard 2. We recommend starting with this step. Placing the Billboard in the scene is the most basic and one of the most important steps.

Select the Billboard panel, and find the Transformation pins in the Pin Values.

By default, the Billboard is placed at the origin of the scene.

By changing the values of Pos (Position) you can move and place it in the scene.

The Y value (the middle one) should be set just a bit higher than the virtual floor's Y position.

Note: The height of the virtual floor is a piece of information that the graphic designer should have. You can visually set the Y position by adjusting the height after turning on the AO to the point when the AO is visible, but not any further.

Let's suppose, that the virtual floor's Y position is 0.168. This means, that we should set the Billboard's Y position to at least 0.169.

This is very important, for two reasons:

Use the Rot (Rotation) values to rotate the Billboard.

Maybe you will find it easier to place the Billboard using the Transformation gizmo feature.

After placing the Billboard and setting its orientation, we recommend continuing with this step.

Usually, on the input, there is some distance between the talent's feet and the bottom of the image. 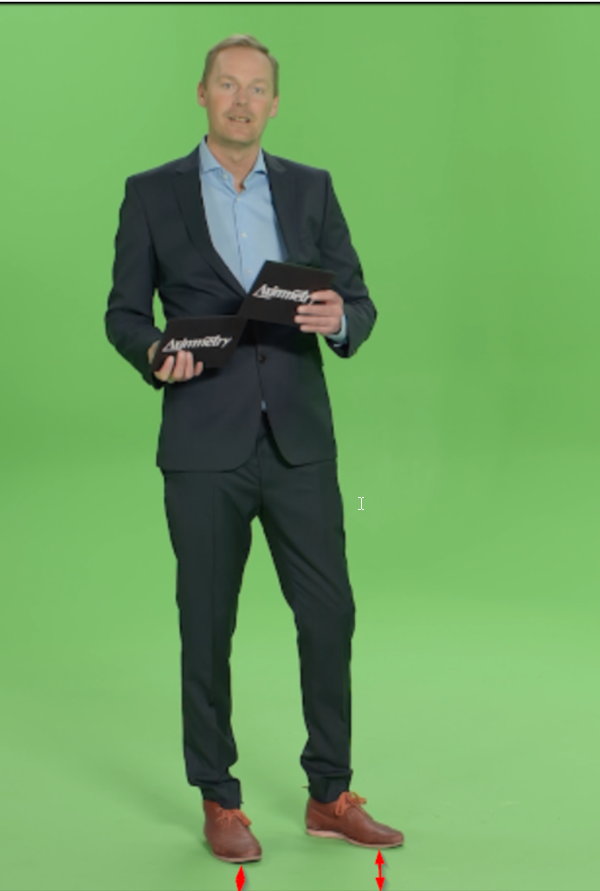 So if you fit the bottom of the Billboard to the virtual surface, the talent looks as if he was floating in the air. If you would simply lower the Billboard to fit the talent to the virtual ground, the AO will disappear.

The Lift feature can help to solve this problem.

This offsets the Billboard's bottom so you can fit your talent to the virtual floor and keep the AO as well.

Lowering the value will push the Billboard down.

This is better, but raising the virtual camera a bit will make this look even better.

Sometimes the input does not appear realistic in size compared to the virtual environment.

You can use the Scale feature to match the image on the Billboard to the real size of the talent.

As you can see, the talent appears way smaller than it should. 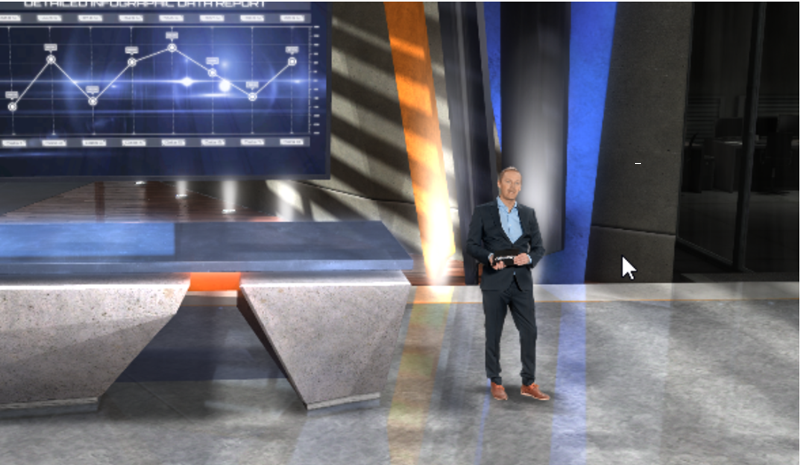 Here, the billboard scale has been set properly Let's suppose the height of the talent, in reality, is about 2m, so using the grid we can scale the billboard accordingly. You can see, according to the grid, the talent appears more than 2m tall, but this is due to the fact that we have used the Lift feature before, introducing some offset at the bottom of the billboard, which is added to the height.

Again, you can also place, rotate, and scale the Billboard visually, using the Transformation Gizmos.

This feature keeps the Billboard turned toward the camera.

Keeps the Billboard parallel with the camera. Useful for dolly movements. It will look more natural.

With this option selected the Billboard won't rotate at all.

Mirrors the billboard along its vertical axis.

There is a dedicated document about Shadows.

The default value of Transparency is Normal (1).
Don't change it.

The edge of the talent on the Billboard can be covered with a small amount of extra light from the virtual scene to make it look more part of the virtual environment.

With this, you can force the center of the Billboard to a distance (closer to the camera) so it will be rendered properly.

Note: keep in mind the distance of the transparent object.

Does the same for the AO.

Adjust the opacity of the size grid.

A lot of the above-mentioned functions work the same with Unreal Engine-rendered scenes, so here we will only highlight the differences and the additional features of Unreal-rendered Billboards.

In Aximmetry DE, you can choose if the Billboard is rendered by Aximmetry or by Unreal Engine. Both have benefits and disadvantages.

Select the CAMERA & RENDER SETUP Panel in the CAMERAS Control Board.

You will find the Allow Virtuals switch in its Pin Values. 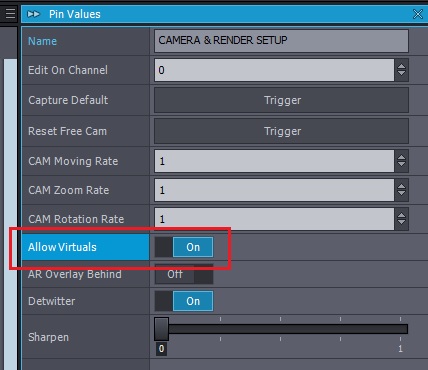 Aximmetry renders the image of the talent on top of the Unreal scene. Virtual objects can occlude the talent, reflections, and shadows are supported. The camera image is accurately reproduced without adding noise or distortions.

Compositing is done entirely in Unreal. Virtual objects can occlude the talent, reflections, and shadows are supported. With this method, the talent can be lit by the lights in the Unreal scene. Virtual camera movement is also supported. The quality of the talent’s image may be slightly degraded.

Navigate back to the BILLBOARDS Control Board and select the Billboard you want to work on.

You can only turn this feature ON if Allow Virtuals is ON.

If ON, the lights of the Unreal Scene will affect the Billboard. In Unreal, there is a type of reflection called Render to Depth.
If you are using this kind of reflection, turn this feature On.

You only need to turn this On if Allow Virtuals is also On.

NOTE: Using this feature with heavily processed billboard textures may lead to unexpected results (even if the texture looks fine in Aximmetry). For example: increasing the brightness significantly with an Adjuster module. This is because this feature expects the pixel values to be in a specific range – values outside this range are clipped and the texture starts to lose detail.

Continue to Cameras Control Board

Once you finshed setting up the Billboard, you can move onto the Cameras Control Board to set up the virtual cameras: