Modules are the fundamental nodes of the Aximmetry Composer. They cover a vast range of functionality from simple functions such as adding together values to complex functions such as the depth of field calculation of a 3D scene.

After selecting the Insert Module... option, the Insert Module window will appear with many modules to choose from.
The window has a search field, a type category browser, and a selection field: 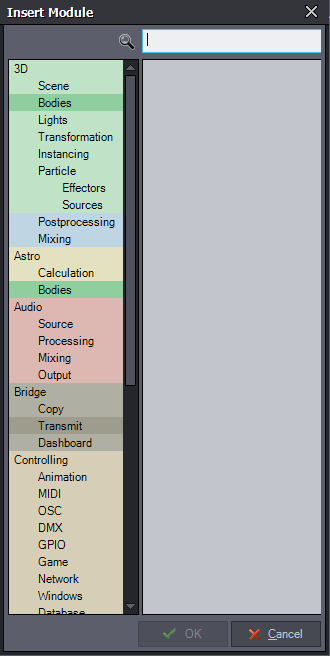 The colors of the modules in the Insert Module window represent the color of the node in the Flow Editor.
When selecting one of the main categories like 3D or Audio, then the modules are primarily listed by their sub-category and then by their alphabetical order.

When a module is added to the Flow, it is automatically given the same name as its type. When there is already a node with the same name, then the module's name is incremented by a number.

To change an already added module's type, right-click on the module and select the Change Module Type... option. This method will keep the connections if possible:

Optimization of your project's hardware load can greatly affect what is possible to achieve. This is especially true in live productions.
Such optimization is when the Flow Editor is not executing modules that are not in use. This is done automatically by Aximmetry and most of the time doesn't affect the project.
There are some cases however when it can lead to confusion, so it will be discussed in detail in this paragraph.

A module is not being in use when the module's output pins are not connected to anything that ends up with an output, in such cases the module won't be executed. The output can be several things, like video outputs, preview panels, recorder modules, or even the peeker which happens when you press down CTRL while your mouse cursor hovers over a connection.

Example of module not being executed

Even if a video is exposed to the right, it doesn't mean that it is connected to an output.
Here, when the Preview 1 panel's video output index changed to "-" from "1", the Video Player module stops being executed:

The example above won't work if there is an output for that video index somewhere elsewhere. The Video Output devices can be such an output: 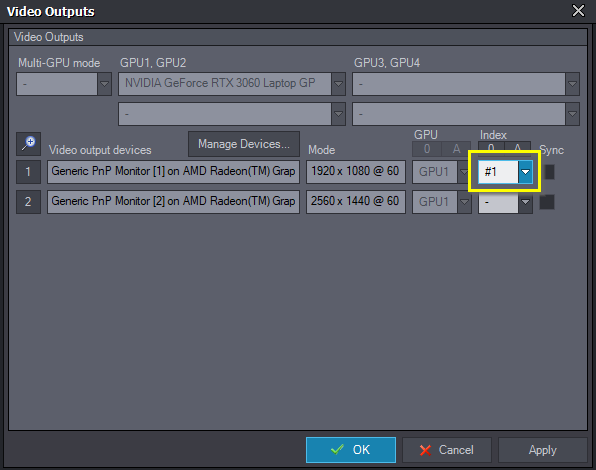 Some modules have Force All or Force Both pins. If these pins are turned on then the nodes connected to the module is executed even if they are not being selected or used.

There is a special module called Force Execution. When the Force Execution module is connected to a module, then that module will be executed even if it is not being used. Like in this example the video will be played even if there is no video index defined for preview and for video output:

Find Module is an option to search for a Module's given name inside a project. It can be especially useful in big compounds like the Camera compounds:

Pressing the ESC keyboard button closes the search. And the Find Module option is also accessible by the usual CTRL + F shortcut.
There is also a Find Module Globally option, where the search includes every compound that is not in a locked state. More on compounds in the Compound documentation.
Pressing TAB switches between search modes: Name, Index, Type, and File.