We differentiate between two kinds of tracking data recording serving different purposes. They can be used independently of each other in any combination.

Its purpose is to enable offline rendering of the final show using pre-recorded camera images and tracking data.

All the inputs or a selection of them can be recorded individually.

Its purpose is to enable further 3D post-production work with a third-party rendering software using the final composite output of Aximmetry, both image and tracking data.

Video recorded: the final composite of the virtual background and the keyed camera images.

Tracking data recorded: the final camera position and focal length data which are already modulated by the Base Cam Transform and ORIGIN settings and the VR path motions. It's stored in an FBX file in order to be able to use in any third-party system. Please note that currently the lens distortion data cannot be recorded with this method. Important that this feature can be used with VirtualCam* compounds as well to record virtual camera motions.

This functionality is added to the INPUTS control board of each TrackedCam*.xcomp.

The pairing of the camera video frames with the corresponding tracking data frames is based on timecode. Therefore it is mandatory to provide the system with a running time code that is compatible with the current system frame rate.

By default, each recording has its own timecode that starts from zero when the recording begins. This is the simplest way to provide synchronization.

However, you may want to use a timecode provided by the camera itself via SDI. It can be either the running internal timecode of the camera or can be taken from a central timecode generator attached to the camera.

This way you even have the freedom to record the image on the camera itself for the best possible image quality, then you'll still be able to pair it with the tracking data recorded in Aximmetry.

For this turn on the Use Input TC option on the RECORD panel:

Select which inputs you want to record. Please take into consideration that recording too many inputs simultaneously may impact the system performance.

You can specify the usual parameters of the recording format. For all cameras, the same settings will be used, but the file names will be suffixed individually based on the tags you provide (Output Suffix X). Furthermore, all takes will have an individual index number. Since these recordings will be re-used later we recommend using a higher bitrate (also depending on your storage capacity). 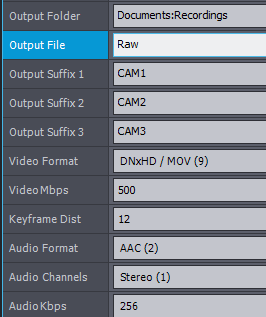 Press the red circle button to start the recording.

On the preview screen, you'll see a red counter displaying the recording time. Also, the indices of the currently recording inputs are indicated.

Use the white stop button to stop the recording. On stopping the last recorded file(s) will be automatically entered into the Input X properties of the PLAYBACK panel thus enabling the immediate checking of the recordings.

Regarding the playback see later in this documentation.

Please note that besides the video file a .xdata file with the same name containing the tracking data is also created.

Recording high-resolution video on the camera

As we discussed above you might want to record the image on the camera itself for the highest possible quality and only record the tracking data with Aximmetry. For that choose the Tracking Only option:

Turn on Use Input TC in the Record panel to use this external timecode.

Please note that in Tracking Only mode you still get a recorded video, but it's created with highly degraded quality for the minimal performance impact. It only serves as a placeholder. Later when you want to playback the material replaces this placeholder by copying the recorded file from your camera's SD card over it.

All inputs are automatically recorded along with its audio. By default, the audio is taken from the same SDI/HDMI input the video is coming from. In order to use a separate sound card or any USB device for receiving audio turn on the Use Audio Device option for the given input and select the corresponding system audio device: 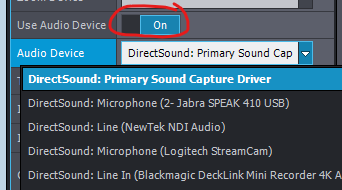 To hear the incoming audio turn on the speaker button on the AUDIO panel and in the Monitor Device property specify which Windows audio output device you want to hear the audio on (usually the default Primary Driver will be fine):

In order to synchronize the incoming video and audio signals use the Audio Dev Delay property. It is expressed in seconds.

Here you can also adjust the Audio Level. It's relative and expressed in decibels, 0 means no change.

In order to playback a recording, select the video file(s) on the PLAYBACK panel. You can specify a file for each input separately. If one of the Input X properties is left blank the corresponding input will continue to receive the live signal even in playback mode.

As we mentioned earlier, after each recording session the last recorded file(s) are automatically entered into these properties.

Please note that here you select a video file, but beside it, a corresponding file in xdata file format with the same name must exist as well.

Turn on the Play button on the panel to put the system into playback mode:

The preview screen will indicate the playback mode and also the indices of the inputs that actually involves in the playback (the other inputs continue to receive their live signal).

By default, you will only see the first frame of the recording frozen. The reason for this is that the system expects you to use a Sequencer to play back the video and tracking because this way it is very easy to add any synchronized animation to your show via additional sequence tracks. So please add a Sequencer and connect it this way: 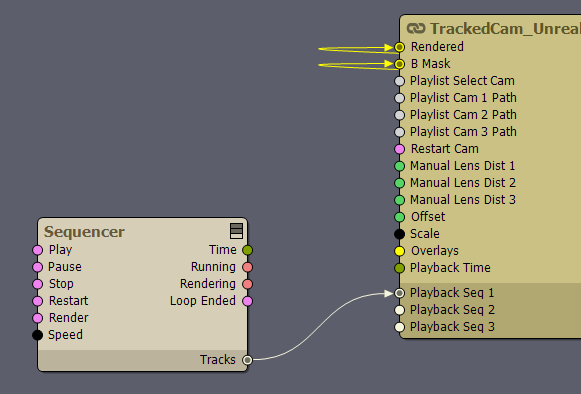 If you use recordings for multiple inputs connect the Sequencer for all of them:

If you open the Sequence Editor by double-clicking the Sequencer you will see a track for each video file you specified on the PLAYBACK panel.

Now you can Play/Stop or seek the sequencer, as usual, to see the recorded material along with the tracking.

As we mentioned you can add any additional animation tracks that will play in sync with the recorded material. 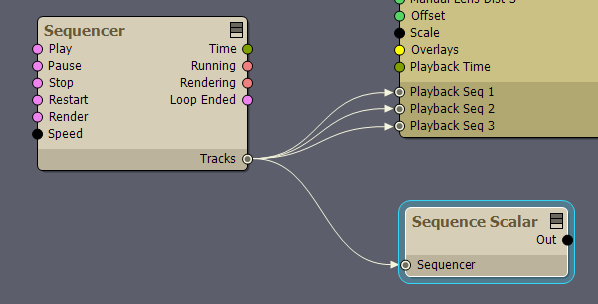 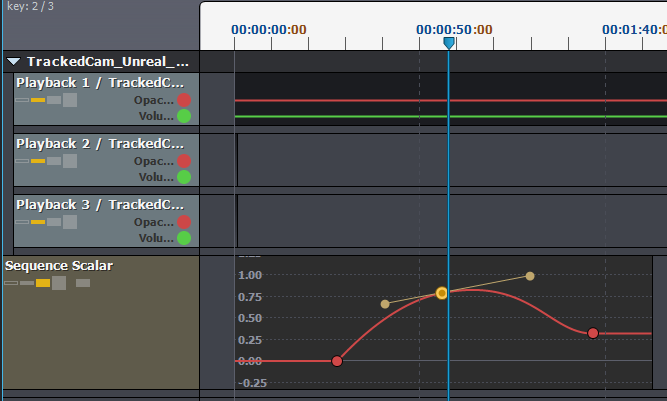 On using the Sequencer in general please see this documentation.

You can leave the playback mode on even while you are recording.

Firstly this way you can instantly see the results when you stop recording since the last recorded file is automatically selected for playback.

Secondly, the files selected for playback on the inputs you didn't select for recording still remain in playback. To be more clear let's suppose you have a recording for all the inputs:

Now you start a new recording with the following settings:

In this case, the current live feed on Input 3 will be recorded while the previously recorded material for Input 1 and 2 will be played back simultaneously, and can be seen e.g. in MATRIX mode along with the live feed.

You can also instruct the system to restart the Sequencer automatically each time you start or stop a recording by making the following connection. This helps both the above usage scenarios.

If you make the following connection you will also get a display of the current playback position.

Please note that the displayed time is the position of the Sequencer, not the video file itself. The two can differ, because you may shift the video track within the sequencer to better suit your animation timeline.

When you're recording an xdata file is also created. It contains the full tracking data, including the camera lens data. If you used an Aximmetry lens file created with Camera Calibrator then the xdata will contain the final calculated FOV, lens distortion, etc. data for each frame. It means that when you play it back you'll be guaranteed to see exactly the same result you got when you did the recording.

However, the raw zoom/focus encoder positions are recorded as well. It means you have the freedom to improve/adjust the lens calibration even after you recorded the material. In order to use an improved or different lens file during playback simply turn off External Lens Data and specify the modified lens file in Tracking Mode.

You can also use the Manual Lens mode to override the recorded lens data.

For this scenario, the tracking data recording functionality is added to the Record_* compound you normally use to record the final image.

If you receive audio from multiple inputs simultaneously then connect the Audio 2, 3 pins as well.

On using the Record compound in general please see this tutorial.

Do not forget the connect the Record Data pin, it carries the tracking and other information to be recorded.

By default the compound only records the video and audio, this is the most common usage. In order to record the tracking data as well, turn on the TRACKING panel:

On the panel, you can specify whether you want to generate the FBX file in ASCII or binary format. The default is the latter, it's more compact.

The pairing of the final composite video frames with the corresponding tracking data frames is based on timecode. Therefore it is mandatory to provide the system with a running time code that is compatible with the current system frame rate.

The tracking data is recorded into an FBX file in the form of several camera animation curves. The curve key timestamps will correspond to the frame timecodes.

By default, each recording has its own timecode that starts from zero when the recording begins. This is the simplest way to provide a synchronization

Aximmetry has its own internal timecode that starts from zero when you start Composer. You can use this timecode as well in order to differentiate between different takes of recording. To use if turn on Use Master TC on the RECORDER panel:

The final composite may contain cuts between multiple camera inputs. But the source of the timecode has to be constant, so you have decide which camera input's timecode will be used. Then turn on Timecode Master for that single input:

Use the RECORDER panel's properties to set up the output video format as usual. Then use the two buttons of the panel to start and stop the recording.

The time indicator will be displayed on the right side of the preview screen to differentiate from the input recording's one.

The resulting FBX file will contain a camera object with aperture properties and animated Focal Length that gives the same aspect ratio and field of view as the Aximmetry output image.

But please note that currently the lens distortion data cannot be recorded this way.

It is worth noting that this recording functionality works together with any VirtualCam compound as well. In this case, the FBX will contain the animated virtual camera positions.

The input recording and the final composite recording functionality can be used independently of each other in any combination.

E.g. you can start a recording for both of them simultaneously.

But what is more useful you can playback a pre-recorded input while recording the final output along with the tracking data for further post-processing.