Open your scene in Unreal Editor.
Select the desired object you want to work with later in Aximmmetry, Make sure it’s a moveable object. You can find this option in Transform in the object’s details.

Open the Blueprints menu, then select Open Level Blueprint. You got a new window. 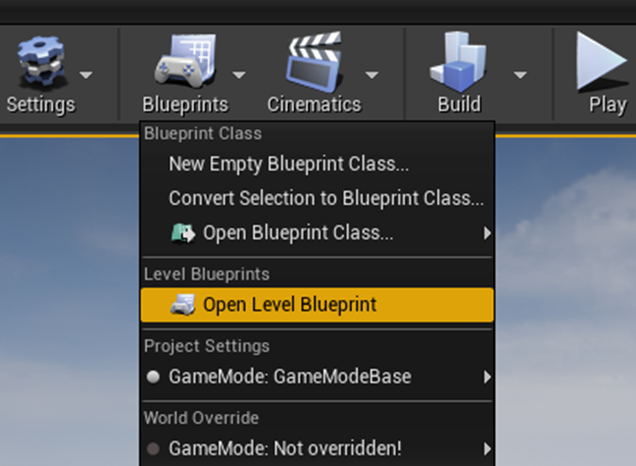 First, you must find Event Tick. To do this, simply right-click on the Blueprint then start typing the Event Tick name in the search bar of the popup menu. 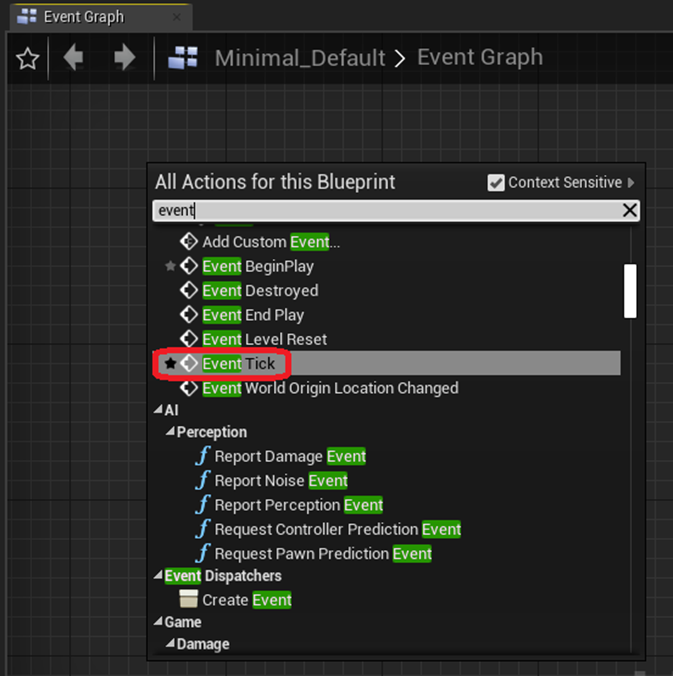 Click on the Even Tick to place it in the Blueprint. The Event Tick is a simple event that is called on every frame of the scene. 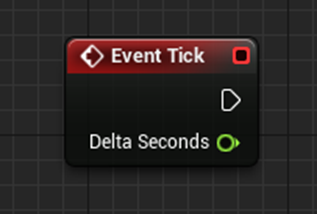 Now drag the object selected from the World Outliner and drop it into the Blueprint. You might need to resize the level blueprint window for this.

You will get a node in the Blueprint.

Now start pulling a binding from the output of this node. When you see the message “Place a new node” release the left mouse button.

You will get a search window. Type SetWorldTransform, then click on it.

2 new nodes will appear on the Blueprint already connected. The Static Mesh Component is a converter between the object (the Statue) and the SetWorldTransform node. 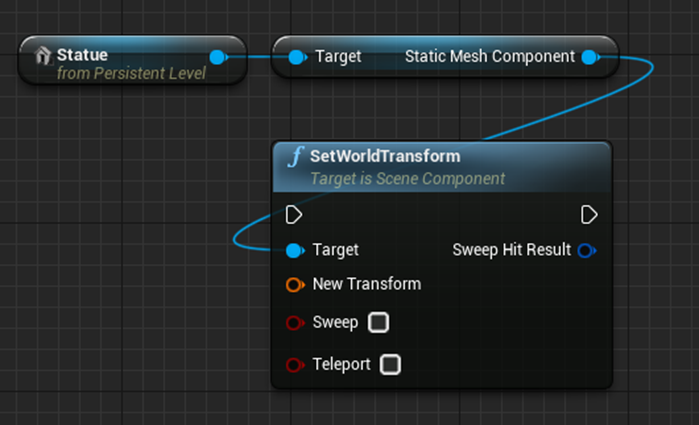 Give a proper name to the Name pin of GetAximmetryTransformation. This name will appear by the scene’s new input PIN in Aximmetry when you place this scene. To do this click in the empty square next to the Name pin and simply type the name you want. 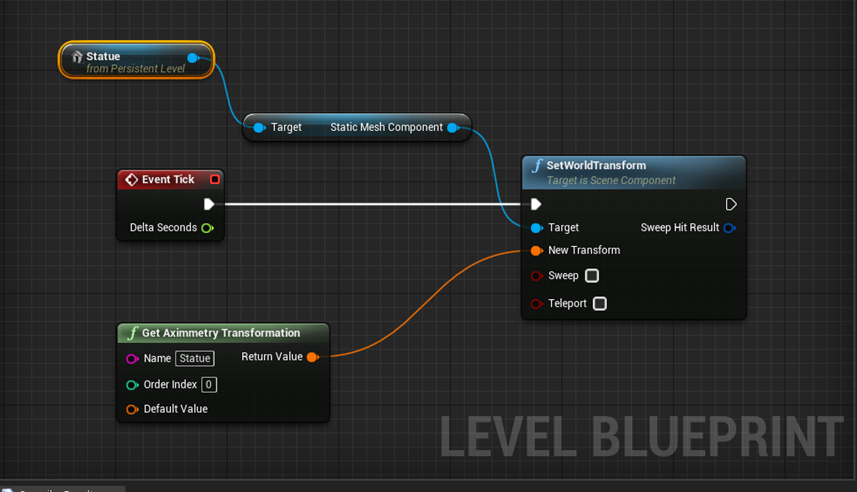 Save the Blueprint and close it. Cook the scene then save it To do this click on the File menu then click on Cook Content for Windows. When it’s ready click on Save All or press Ctrl+Shift+S.

You can close UE for now.

The object had been prepared in the Unreal Scene. You will learn how to make good use of this in Aximmetry DE. You can:

Place the Unreal project in the compound. 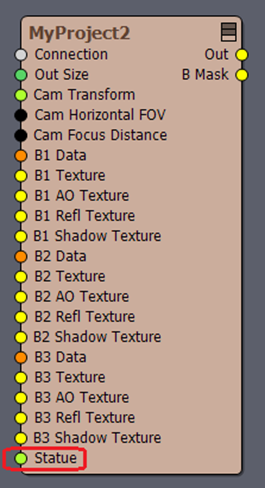 But here is a quick help for connecting the compound.
Connect the Scene’s Out pin to the VirtualCam’s Rendered pin. Also, connect the B Mask pins
Make a connection between the VirtualCam’s Cam Transform and the Scene’s Cam Transform pin. Do the same between the Cam Horizontal FOV, Cam Focus Distance, and B1 pins. B1 pins are the Cam1 Billboard's pins.

Insert Scene Node module, then connect the World Transf. pin to the Unreal Scene’s pin you created before. In this example, it is the Statue Pin.

Now you can move the object by changing the Transformation values in Scene Node’s Pin Values.

But there is a more comfortable solution.
Enable the Edit Scene on Preview 1. More info on this feature: "Link"
Click on the Edit Scene On menu then select the Preview window you want to work in. In this example, it is Preview 1. 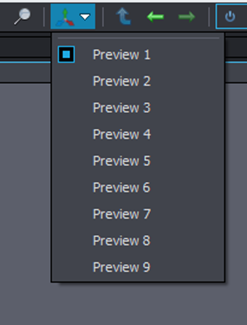 Now if you click on Scene Node, you will be able to move the object in Preview 1 by dragging the transformation gizmo (which looks like vectors) and moving the mouse. 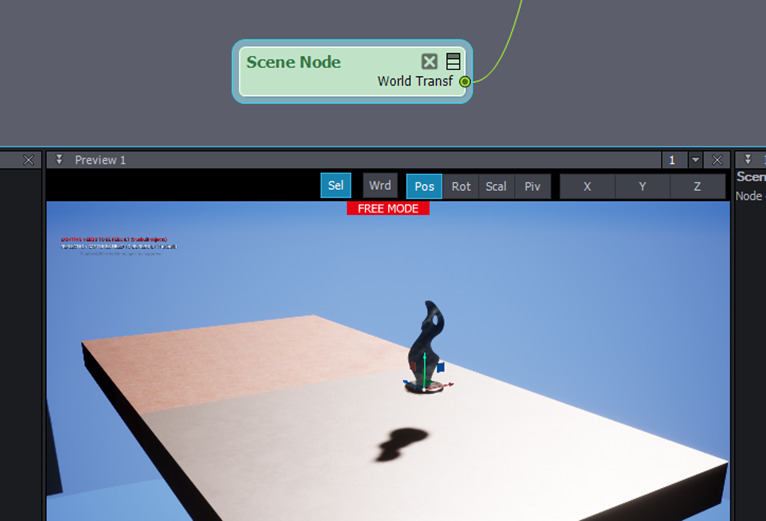 Now you can move the object without re-cooking the scene in UE. You will learn how to animate its movement.

To do this first delete Scene Node if you are following this document from the beginning. If not, just skip it.
Now add a new module called Sequence Node. You will find the same World Transf pin on it as on the Scene Node. Connect it to the Scene’s pin you made.

Do the same with the Seq Rotation and the Seq Scale if you need to rotate and scale the object. 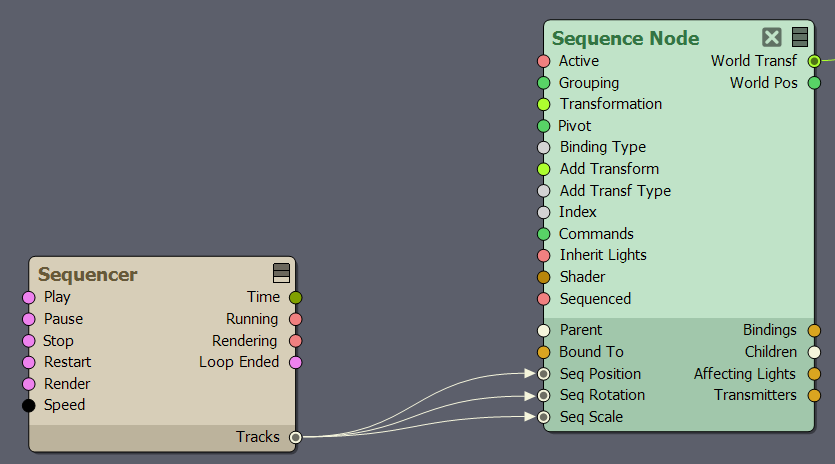 Now open the Sequence Editor. To do this simply double-click on the Sequencer.
Place the object in its starting position. Do it as it is written in the Move the object manually chapter.
Click on the Film Slate icon to activate Sequence Capture. If you want to capture Rotation and Scale you must activate their tracks as well. 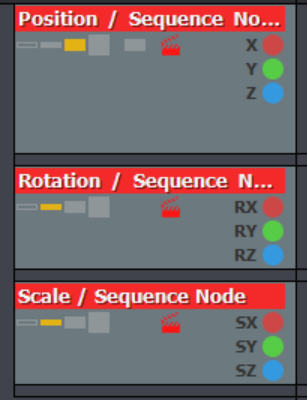 Now click on Capture to catch the first position on the object.

Now move the marker to the end time of the animation It's been set to 2 sec in this example.

Place the object to its end position and click on Capture as well.
You will see a small globe on the colored lines; those are the capture points.
Click on Play and enjoy the animated movement of your object.
You can place more capture points as well if you want a more complex movement.