In this document, we will describe the connections you have to create in Aximmetry DE.

Aximmetry DE can connect to Unreal Engine in two different ways, each one is useful in a different scenario

This is the default connection mode in Aximmetry DE.

Aximmetry directly loads the content generated by Unreal, so running a separate Unreal Editor is not needed. This mode should be used in production because it provides the highest performance. This is what you have used so far.

In Cooked mode, Aximmetry uses the cooked version of the project which is generated when you press Aximmetry / Cook Content for Aximmetry DE in Unreal. 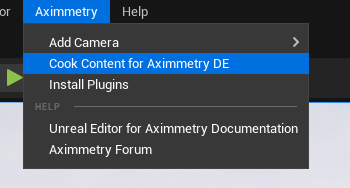 This means that if you edit the scene in Unreal, you have to cook the project again. You can leave Aximmetry running with the Unreal Project module in Cooked mode - it will pick up the changes when cooking is finished and reload the project automatically. If you added/removed/changed any Aximmetry nodes in the Unreal blueprint as described in section 4.1, after cooking the project, Aximmetry will detect the change and a red chain-link button will show up in the upper right corner of the module. Click on this button to update the pin list. 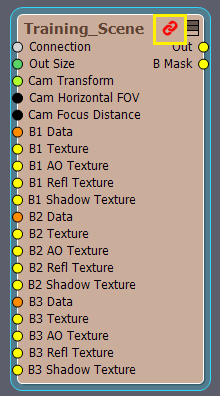 Aximmetry connects to a standalone Unreal Editor instance. This is useful while you are building your scene in Unreal, because it lets you interactively edit and test the scene, without having to cook it after every change.

In Live Sync mode, Aximmetry connects to the running Unreal Editor when you press the Play button. This is when the Unreal Project module will pick up the changes in the pin list as described above. Click on the red chain-link button to update the pin list.

To use Live Sync:

You can stop and start both the Unreal scene and the Aximmetry compound or even the Unreal Editor and Aximmetry itself, and the connection will be re-established automatically.

The resolution of the viewport is set automatically based on the value of the Out Size pin just like in Cooked mode. If the scene is running in a separate window, the window is also resized.

For each workflow, you have to place the proper Aximmetry camera in the unreal scene. This is described in the Preparing Your Unreal Project To Be Used With Aximmetry DE document.

Drag-and-drop the camera compound into the Aximmetry DE Flow editor and connect the pins which you can see on the images.

For virtual cameras you can use the following compounds:

In the example below we are using the VirtualCam_Unreal_A-B_Preview_3-Cam.xcomp compound.
You can see the connections here: 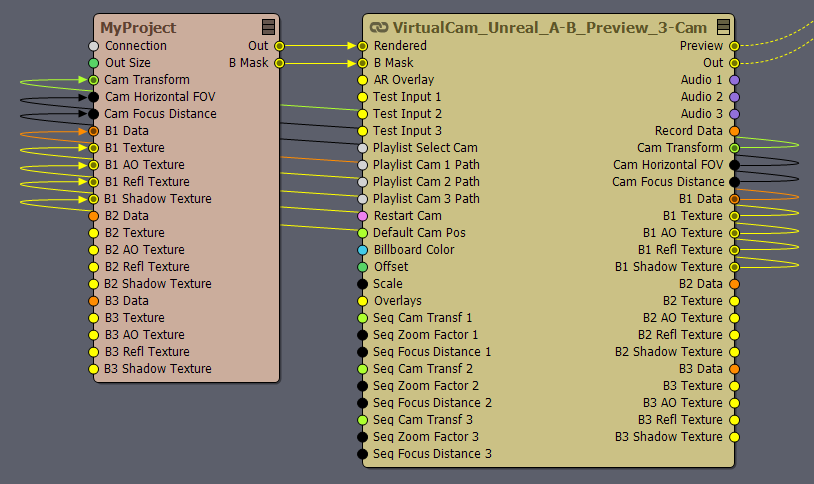 Please note that on the screenshot we have only connected the B1 * pins corresponding to Billboard 1. If you want to use more Billboards, you have to connect them as well (B2 *, B3 *).

For tracked cameras you can use the following compounds:

In the example below we are using the TrackedCam_Unreal_Prev_3-Cam_3-Billboard.xcomp compound.
You can see the connections here:

For mixed cameras you can use the following compounds:

In the example below we are using the MixedCam_Unreal_A-B_Preview_3+3-Cam.xcomp compound.
You can see the connections here:

Since Mixed cams are simply a mix of tracked and virtual cameras, the connections will also be a mix of them. This is why (just like before in the Virtual Camera workflow part) we have only connected Billboard 1. If you want to use more billboards, connect the rest of the B* pins as well.

For AR with tracked cameras you can use the following compound:

You can see the connections here:

Reflection * are only necessary if you have added reflection catchers to your scene. (More on this in the Preparing Your Unreal Project To Be Used With Aximmetry DE article)
The same applies to Shadow and Shadow Clean Plate.

For LED-wall cameras you can use the following compound:

You can see the connections here: 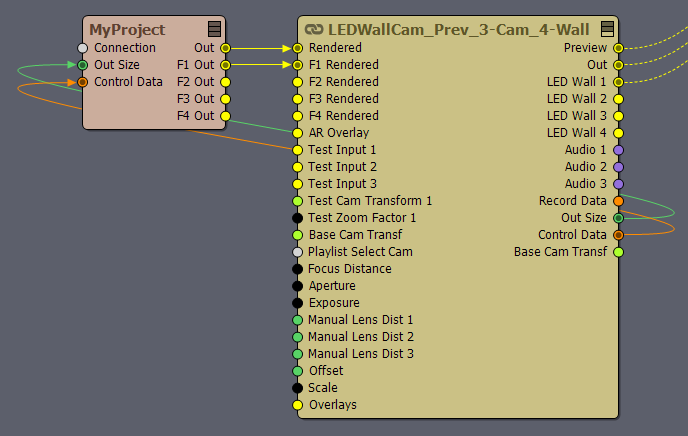 For all of the above, connect as many as you would like to use.

We have separate documents for